. I bought this on sale at some point, and it subsequently sat in the pantry for a while. I’m not sure how long, but there’s another 8 months to go until the use-by date, so I’m not worried. I like to have stuff like this on hand because sometimes I get in the mood to eat bread, and that usually means I have to make it myself. This time, I was also in desperate need of clearing out some pantry space, so making this mix was the easy answer.

This is the third loaf of gluten free bread I’ve made from a mix (Pamela’s and Bob’s Red Mill were the other ones I tried), and it did fairly well. It rose way more than I thought it would, but it was still heavy and moist the first day, only to very quickly dry out by the third day after baking. 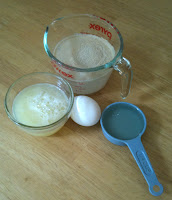 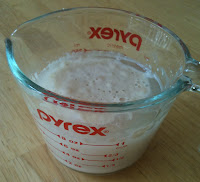 Add the yeast to the water and give it at least a good 5 minutes to dissolve and proof. I was actually quite worried because after 20 minutes mine still didn’t look all that active, but I went ahead and used it and the bread rose just fine. 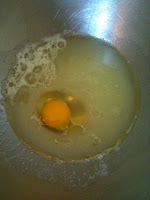 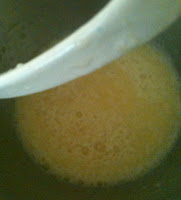 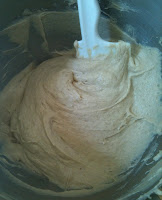 Combine the egg, egg whites, and oil. Add the yeast, and then the package of flour blend. Beat for 3 minutes with an electric mixer on medium speed, scraping the bowl down as needed.

Spray a bread pan with nonstick cooking spray, and if you’re not using your oven to let the dough rise, you can go ahead and let it start preheating to 350 degrees. Pour the bread dough (it’s more like quickbread batter) into the pan. Cover loosely and let rise for at least 30 minutes. It doesn’t double, but you can see it clearly does rise, just compare the pictures above to those below. 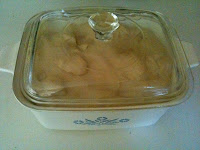 By the way, I was too lazy to look for couldn’t find my loaf pan, so I used one of these casserole dishes because it was the first baking vessel I could access without potentially disturbing a precariously stacked tower of teetering crockery and bakeware. It worked out great–I used the lid to cover the dish for proofing, and then again during baking so the top wouldn’t over brown. Well, at least not much… And here’s the finished product. I was very pleased to see that it rose even more during baking.

The crust is more flaky than crusty, and the inside has a coarse crumb, like most gluten free bread, even though the flour blend was fairly fine.  For me this bread was moist on the day of baking, but soon developed a more cornbread-like texture and quickly dried out. It has a deeper flavor than regular bread, and it goes well equally with sweet or savory toppings. I tried it with cheese and Branston Pickle, lemon curd, and honey. It worked well with all of them.

Deal Alert: Instant Pot Duo 7-in-1 Save $20 and Free Shipping