June 29th is National Almond Butter Crunch Day. Almond butter is a great way to get that good, healthy fat.  There are many varieties of almond butter on the market and most of them are gluten-free.

All of the above listed almond butters are very good, but if I had to choose my favorite, I would have to go with END_OF_DOCUMENT_TOKEN_TO_BE_REPLACED

This is the other pizza that my husband made for our dinner tonight.  This is my personal favorite.  There is something very comforting about the italian sausage and roasted veggies.  The other pizza he made was a Spinach, Pancetta and Goat Cheese Pizza.  We use Udi’s frozen GF pizza crust, but any GF crust will work.

Eating pad thai in a restaurant might be hard if cross contamination is a concern.

If you live in the bay area, access to rice END_OF_DOCUMENT_TOKEN_TO_BE_REPLACED

Udi’s Bread: What’s UP with All the Holes??

I asked a few celiac friends if they had noticed a change in Udi’s bread. They all answered with the same statement; “Yes, it’s full of holes!”  I emailed Udi’s a few times, but never heard back from them. So I did what all good little bloggers do and posted a picture on my blog.

I have no idea how many people have complained to Udi’s about their hollow bread, or if they are taking measures to correct it. They certainly have not asked for my two cents (imagine that!). But as a celiac with a nutrition and food science background I know that if you add too much yeast or baking powder in relationship to the flour; or you END_OF_DOCUMENT_TOKEN_TO_BE_REPLACED

Do you ever put certain foods together that other people would cringe at? I used to have all kind of interesting combos when I was a kid: my Grandmas meat loaf, mashed potatoes, gravy & peas all mixed up and chili and mashed potatoes topped with cheese are just a couple that stand out in my head. My sister still eats one of her childhood favorite combinations – Doritos and applesauce. I don’t think I have ever tried that, or not that I recall. I may have blocked it out. LOL! Anyway, I don’t judge, as to each his own.

The other day I was craving a tuna melt. I meandered into the kitchen and started to pull out the ingredients to create my meal and realized I had no base for the melt. I had run out of my Food for Life English Muffins and Trader Joe’s French Rolls. Clearly I was slacking in the gluten-free grocery department or eating too many carbs – maybe a little of both. I began to brainstorm about what I could use for the base. Did I want to bake? Not really. I just wanted to eat. I spotted my corn tortillas in the refrigerator and a light bulb went on – tuna melt tostadas! This turned out so good that I may be using this as a new standby in my lunch line up! 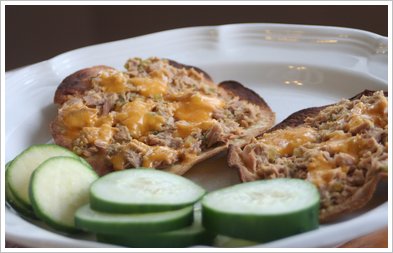 This turned out even better than I thought it would! I would absolutely END_OF_DOCUMENT_TOKEN_TO_BE_REPLACED