We discovered during the past year that my 4-year-old son Ronin and my 21-month-old daughter Ellie are both gluten and dairy intolerant. My husband John is gluten-free too. The good news is that changing Ronin’s diet has helped his anxiety-related sleep issues decrease immensely. He used to have night terrors every night, but now only has them on the rare occasions we miss cutting out the gluten.

Since John has been gluten free for a while, I came up with this stuffing recipe a few years ago for Thanksgiving. And its always been a huge hit. This year I’ve modified it to also remove the dairy for the kiddos.

END_OF_DOCUMENT_TOKEN_TO_BE_REPLACED

There are lots of ways to pack a healthy gluten-free school lunch. Start by including your gluten-free child in the weekly menu planning process- this will increase the odds that he or she will actually eat what you pack for them!

Good quality proteins, complex carbohydrates and healthy fats are key to improving your child’s diet. These tips and resources will help you plan and pack healthier gluten-free school lunches for your gluten-free child.

Difficulty: Average
Time Required: Varies – Plan ahead to save time!

I recently had the pleasure of meeting Mary Klinnert, PhD at National Jewish Health. Mary is an expert in child psychology and has numerous previous research studies on the effects of asthma on mental health.  She started her career mostly focusing on asthma, but in recent years, has turned much of her attention to the psychological aspects of living with life threatening food allergies.

While meeting with Mary, she briefed me on a study she is conducting on the psychological aspects of food allergies and how this study differs from the majority of previous studies that mostly focus on quality of life issues related to living with food allergies.  The hope of Mary and the rest of the team is to get to the root of what is happening to families that sometimes contributes to deeper END_OF_DOCUMENT_TOKEN_TO_BE_REPLACED

Calling All Volunteers…Gluten-free Camps Need You

This is the time of year when parents are planning their summer activities and for those kids on the gluten-free diet those plans include attending a gluten-free camp.  There are a number of gluten-free camps out there who are in need of volunteers to perform a variety of tasks.

They camps lists below are looking for volunteers to work six hour shifts in the kitchen.  If you are interested in helping make this a END_OF_DOCUMENT_TOKEN_TO_BE_REPLACED

Giving Thanks for Health…My Story :) 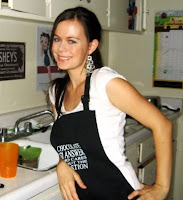 Here's me at 1 year gluten-free

This Holiday Season I am especially thankful for the health I now enjoy… it’s been a long journey these past 10 years or so…but I am so thankful for the knowledge I’ve gained about living a Gluten-Free lifestyle…the benefits that have come from it, and that after 10 years, I can finally say that I feel like “me” again. :)

I’ve never really shared my entire experience, and normally don’t write posts that are too personal… but perhaps this can help someone out there who is wondering if they might have Gluten Intolerance or Celiac Disease… or someone who has been diagnosed  and wonders if it is really a “big deal” if they HAVE to go gluten-free or not. I can tell you from personal experience that it WILL CHANGE YOUR LIFE!!! It changed mine… and here’s how:

It all started back in junior high and high school. I just felt “tired” all the time. I can’t even tell you how many times a day someone would come up to me and say, “What’s wrong? You look tired.” I even remember someone saying to me once, “You look dead.” (ouch!) It seemed like maybe I was just depressed or END_OF_DOCUMENT_TOKEN_TO_BE_REPLACED

Gluten Free Soapbox: We Are Not Crazy!

This week’s gluten free soapbox comes from the personal archives. I’m absolutely certain that I’m not the only one who has encountered this, but it doesn’t seem to get talked about much…

Often times, it seems that people who are on strict gluten free diets get viewed as high maintenance, or picky. The constant need to check and double check ingredients tends to bother some people. The reports of contamination and reactions go unbelieved, and people give that knowing look when “gluten free” is mentioned.

I even had a doctor say that the worst that could happen with Celiac Disease is diarrhea, so not to END_OF_DOCUMENT_TOKEN_TO_BE_REPLACED

The CDC’s Autism and Developmental Disabilities Monitoring (ADDM) Network released data in 2007 that found about 1 in 150 (8-year-old) children in multiple areas of the United States had an Autism Spectrum Disorder (ASD). The number of diagnosed cases of autism is on the rise; the reason(s) for this is unclear.   Autism knows no racial, ethnic or social boundaries.  Family income, lifestyle, and educational levels do not appear to affect the chance of occurrence.

Fortunately, dietary changes can make a significant change in people with autism.  Research is profound on the positive impact that a gluten and casein free diet can make on children with autism.  Gluten and/or casein free diets have been implemented to reduce autistic behavior, in addition to special education, since the early eighties {Autism, Vol. 3, No. 1, 45-65 (1999)}.  The scientific studies include END_OF_DOCUMENT_TOKEN_TO_BE_REPLACED

Q: How long have you been gluten free?
A: Four years

Q: Why are you on a gluten free diet?
A: Thanks to my sister END_OF_DOCUMENT_TOKEN_TO_BE_REPLACED

Q: How long have you been gluten free?
A: Almost one year, and my stomach-aches are very rare now!

Q: Why are you on a gluten free diet?
A: I was diagnosed with celiac last October using the blood test – I didn’t END_OF_DOCUMENT_TOKEN_TO_BE_REPLACED

These Puffs are the first melt-in-your-mouth organic finger food for toddlers that helps them to learn self-feeding and they are the only gluten-free puffs on the market.  The puffs are rich in vitamin D and are the only baby snacks with added vitamin B and calcium.  They contain half the sugar of similar products and are free of artificial colors/flavors and GMOs.  END_OF_DOCUMENT_TOKEN_TO_BE_REPLACED