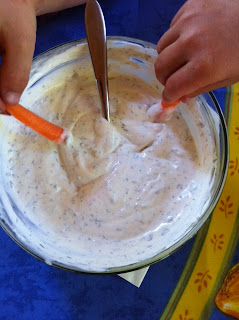 I was sitting at the table, reviewing one of my recipes which had not been tested yet for my cookbook. Ranch dressing is one of those items you would assume would be gluten-free until you look at the label. Then you also might see all of the other ingredients that aren’t so appealing.

My kids are big fans of ranch dressing so I thought, why not try it right now?  I normally don’t make everything from scratch but I was curious to see if it was worth it to make my own.

Assuming you have the ingredients in your kitchen (which I usually do), this can be whipped up in less than 5 minutes. It’s always better if it sets but if you can’t wait, don’t worry, it’s still great.

When I made it, I called the kids over for a taste test. They grabbed some carrots from the fridge and dug in. My son then announced END_OF_DOCUMENT_TOKEN_TO_BE_REPLACED

Rachel, The Stay at Home Chef, dishes up this super nutritious gluten-free recipe!

This Healthy Tuna Stuffed Avocado is stuffed with a flavorful southwest mixture of tuna, bell pepper, jalapeno, and cilantro. You can adapt the recipe as you wish. No mayo is necessary. It’s a healthy, satisfying lunch that tastes great!

When most of you land on our website, your have come to expect yet another gluten free dish, ideally in a baked version. Don’t worry, we are still developing gluten free recipes and plan on doing so for some time to come. However, in our own home, we also prepare many raw food dishes as well. We especially enjoy the many END_OF_DOCUMENT_TOKEN_TO_BE_REPLACED

This recipe for Potato Salad with Fresh Green Beans and Tarragon Dressing is not made with mayonnaise. That means it is a safer salad choice for picnics and cookouts. Bacon and a fabulous fresh tarragon dressing make this recipe a real crowd favorite. END_OF_DOCUMENT_TOKEN_TO_BE_REPLACED

After starting the gluten-free diet, pasta dishes were a little tougher to make. Some pastas don’t hold up well to being cooked in boiling water and then baked. I have found that END_OF_DOCUMENT_TOKEN_TO_BE_REPLACED

I made the quinoa cakes the next week. Surprisingly, everyone (8 year old son and husband included) loved them. What a great way to get some healthy protein for us all! I hope you will give it a try. END_OF_DOCUMENT_TOKEN_TO_BE_REPLACED

I LOVE the San-J orange sauce.  I really love the San-J orange sauce when I add a hint of sriracha chili sauce to it.  My daughter does not like chicken but she devours this dish.  It is the perfect combination of sweet, spicy and salty.  And, of course, it is super easy to make. END_OF_DOCUMENT_TOKEN_TO_BE_REPLACED