I have lived in Northern California for over a decade and I have never made cioppino until last week. I have no idea why; maybe it seemed intimidating, even to me! After having it at a friend’s house over the holidays and seeing how simple it was, I knew it was time for me to tackle it.

The recipe she used was this one from Giada de Laurentiis which was delicious, of course, but one thing she (my friend, not Giada) complained about was the availability (and cost) of the fish stock. Since I often make seafood risotto with chicken stock, I was curious if I could pull it off for cioppino as well.

After making it last weekend for some friends, the results were unanimous; the chicken stock not only made the broth lighter but it was less salty. I decided to use the juice from the canned clams to add some extra flavor. With the exception of the halibut and the crab (it’s high season for Dungeness right now), the other fish was frozen (shrimp and scallops) or from a END_OF_DOCUMENT_TOKEN_TO_BE_REPLACED

A good gluten free lasagna recipe can be challenging for gluten free cooks because several of the usual ingredients may contain gluten. Italian sausage, processed marinara or tomato sauce and packaged seasonings may contain gluten as an additive. And of course, the majority of lasagna noodle products are made from wheat flour.This recipe is an adaptation of a Tyler Florence recipe called “Drop-Dead Lasagna” featured in his book Tyler Florence’s Real Kitchen. Serve this rich, herb-laden gluten free version of lasagna to anyone, anytime, anywhere and comments will include “This is the best lasagna I have ever had!” 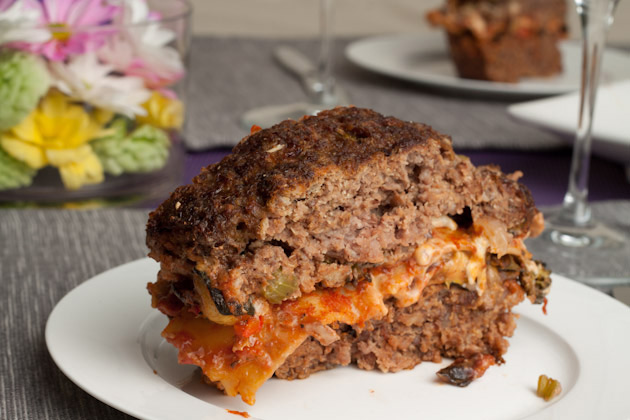 On with the eats…

I love roasted vegetable lasagna, Kevin loves meatloaf. But I only had time to make one of them this past weekend.

Then I thought to myself, self: why decide between the two?

His City Tavern in Philadelphia is a faithful recreation of an original 18th century tavern where Chef Staib brings history to life with his wonderful dishes. He has made numerous appearances on local and national cooking shows, such as The Food Network’s Best Thing I Ever Ate and Iron Chef.

Chef Staib is the culinary ambassador to Deborah Heart & Lung Center, a hospital in New Jersey. He develops heart healthy recipes approved by nutritionists for a heart healthy diet, and then appears weekly on CBS to demonstrate them.  We were thrilled when Chef Staib offered to provide Glutenfreeworks.com one of his incredible gluten-free recipes. END_OF_DOCUMENT_TOKEN_TO_BE_REPLACED

Last weekend my Aunts Sue and Patti invited us over for dinner and some delicious gluten-free, crust-free cheesecake for my birthday. While we were there hanging out in the kitchen chatting with my Aunt Bryan and I started flipping through the Kraft Foods magazine “Food&Family” and Bryan kept picking out recipes he wanted me to make.  We do this often.  I’ll get a new magazine or cookbook and I’ll flip through it then give it to him to pick out what he wants to try first. So in this one, he picked out a few but the one he wanted first (aka, the next day!!) was the Cheddar-Shrimp Nachos.

They looked delicious in the picture, but I changed a few things around (go figure) to make them suitable for the both of us to enjoy but also I wasn’t a fan of some of the ingredients and wanted END_OF_DOCUMENT_TOKEN_TO_BE_REPLACED

When the weather turns cool, I think comfort foods. With a busy day ahead, I knew my crock pot would come in handy. Once again, it delivered, even with a power outage toward the end of its cycle!

Here’s a delicious recipe for beef stew which I have converted to gluten-free. To make it “with gluten”, use regular flour instead of the white rice and potato starch. The process and seasonings are the same.

We are very lucky to have quality beef right down the road, fromMarkegard Family Grass-Fed. The test is in the taste which truly delivered. It wasn’t too greasy, either, and was very tender. END_OF_DOCUMENT_TOKEN_TO_BE_REPLACED

About one month ago, I put out my Breakfast Millet article to rave reviews. I had gotten so many emails thanking me for putting out the article and most of them requesting that I put out another one for a savory millet dish. As I am not one to disappoint may I just say…..the millet saga continues.

I seriously never get tired of talking about millet. Delicious, healthy and versatile millet is a lot like rice and can be the vehicle to transform even the most mundane dish into something exciting. To get the scoop on the health aspects and back story of millet, END_OF_DOCUMENT_TOKEN_TO_BE_REPLACED

The holidays are fast upon us, and not only do we have to plan the Thanksgiving meal, but the Thanksgiving leftovers as well. Usually in my house there are lots of turkey and maybe some potatoes, the stuffing is almost always the first thing to go. But after so long, cold turkey sandwiches and turkey and gravy tend to get a bit bland. I came up with this recipe last year when all I had left after the dust has settled was turkey, enjoy! END_OF_DOCUMENT_TOKEN_TO_BE_REPLACED

Squash and Turkey Bacon Hash on Arugula and Mixed Greens

Squash and turkey bacon hash takes a savory-sweet spin on many of the usual Thanksgiving ingredients – a spin that is tasty and very nutritious! The secret to the development of the flavors is being patient and allowing the ingredie END_OF_DOCUMENT_TOKEN_TO_BE_REPLACED

We discovered during the past year that my 4-year-old son Ronin and my 21-month-old daughter Ellie are both gluten and dairy intolerant. My husband John is gluten-free too. The good news is that changing Ronin’s diet has helped his anxiety-related sleep issues decrease immensely. He used to have night terrors every night, but now only has them on the rare occasions we miss cutting out the gluten.

Since John has been gluten free for a while, I came up with this stuffing recipe a few years ago for Thanksgiving. And its always been a huge hit. This year I’ve modified it to also remove the dairy for the kiddos.