As we’ve discussed, everything is better in mini form.

Except portions of gourmet mac n cheese. Always take the big dish of that stuff. It’s not everyday that you will come across a heaping portion of creamy, cheesy, black truffle-y, mac n cheese.

END_OF_DOCUMENT_TOKEN_TO_BE_REPLACED

After starting the gluten-free diet, pasta dishes were a little tougher to make. Some pastas don’t hold up well to being cooked in boiling water and then baked. I have found that END_OF_DOCUMENT_TOKEN_TO_BE_REPLACED

Deep fried gluten-free onion rings are a real treat! I don’t deep fry often but when I do, I use this recipe and either Vidalia or Walla Walla onions. They’re crunchy delicious.

I made the quinoa cakes the next week. Surprisingly, everyone (8 year old son and husband included) loved them. What a great way to get some healthy protein for us all! I hope you will give it a try. END_OF_DOCUMENT_TOKEN_TO_BE_REPLACED 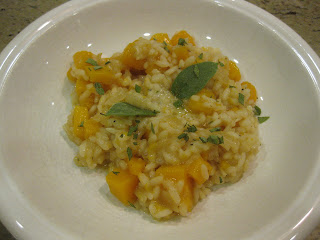 This is a hearty dish perfect for late fall or winter. It’s also wonderful with any root vegetable like turnip, carrot, parsnip, rutabaga, and sweet potato. If you don’t want to bother cutting the squash many stores offer it pre-cut.
END_OF_DOCUMENT_TOKEN_TO_BE_REPLACED

In my pre-coeliac days, canapés were a doddle. Even on a budget. The day before a party I would buy the cheapest bread from the supermarket, cut out as many circles of bread as I could get out of each slice, dip them in olive oil and press them into pattie tins or mini muffin tins and bake.   I would end up with hundreds of little crisp toasts that kept overnight in a sealed box ready to be topped with an array of fresh toppings throughout the evening.

These days, that isn’t an option!  Gluten free bread is too expensive to buy, too small to get more than 2 circles out of (with a lot of wastage), and frequently too crumbly to use.  Home made is better – but that is an awful lot of bread to make, slice and cut.  Just not practical – especially when you have no fridge or kitchen space – or time – for advanced prep because you are running a supperclub!

So this week I was left wondering what I could use as canapé bases for our Christmas Party that would be a) gluten free b) economical c) effective and these are my top three suggestions:

END_OF_DOCUMENT_TOKEN_TO_BE_REPLACED

When Sarah Henkin and I were trying to come up with a menu item for samples at the Ferry Plaza Farmer’s Market FoodWise booth, we decided to make delicious, late summer tomatoes the centerpiece. We needed to keep the dish simple since there were some other events happening that day. Roasted tomatoes on top of something seemed like a good option to me.

Since we eat gluten-free, I tend to not think about using bread with tomatoes (although the thought does leave me with pangs of longing for Acme). My standard fallback is usually polenta. I made a similar dish last year with roasted veggies and gorgonzola (see that post here) so this needed to be different. END_OF_DOCUMENT_TOKEN_TO_BE_REPLACED

Did you know that you can make hummus with sunflower seeds? I didn’t either until I learned about it from my friend Dallas. Dallas is one of my most inspiring friends when it comes to healthy eating. She is a vegetarian, and although she isn’t gluten-free, much of her diet is naturally gluten-free, because she sticks to whole foods. Dallas also hosts our Raw Foods Potlucks each month. If you haven’t checked out this post on past Raw Foods Potlucks, take a look back.

But back to hummus. I love hummus. I make a big batch of it almost every weekend, and I pack it in my lunchbox throughout the week for an afternoon snack. One scoop of hummus covered with an assortment of veggies is a quick, easy, healthy END_OF_DOCUMENT_TOKEN_TO_BE_REPLACED

I LOVE the San-J orange sauce.  I really love the San-J orange sauce when I add a hint of sriracha chili sauce to it.  My daughter does not like chicken but she devours this dish.  It is the perfect combination of sweet, spicy and salty.  And, of course, it is super easy to make. END_OF_DOCUMENT_TOKEN_TO_BE_REPLACED

Eating pad thai in a restaurant might be hard if cross contamination is a concern.

If you live in the bay area, access to rice END_OF_DOCUMENT_TOKEN_TO_BE_REPLACED