I have shared my rice bowls many times in the past, and they are some of my favorite, quick meals.  However, the other day, I had a huge sweet potato that needed to be used, but I really wanted a burger.  I didn’t want a bun, so I decided to make a burger bowl or deconstructed burger.  I made my sweet potato into spicy sweet potato hash browns & then layered in the bowl with some mushrooms that I had sauteed in extra virgin olive oil and white wine. 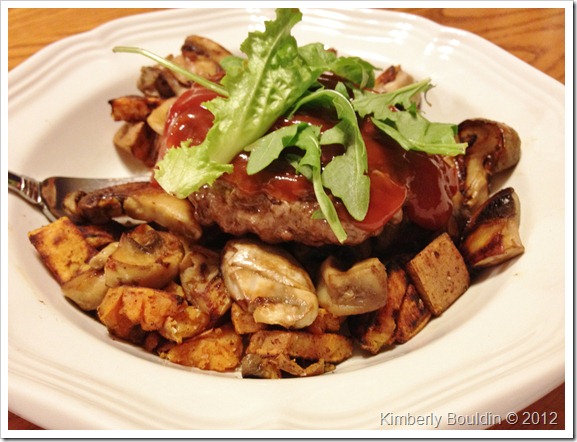 1.  Chop sweet potato into small chunks.  The smaller they are, the faster they will cook.  I have found that this is important with sweet potatoes, as they tend to burn on the outside if you aren’t careful.

2.  Heat oil in pan (I used roughly 1-2 teaspoons for 1 large potato).  I cooked the sweet potatoes over medium head to avoid burning.

3.  Season potatoes with cinnamon & cayenne to taste.  I just eyeball it and may have used a little too much cayenne because we were all coughing, but the potatoes tasted great!

4.  Cover with lid & cook until browned on both sides.  Season with a dash or 2 of sea salt.

Meanwhile, cook your burger to your liking.  I used 90% lean, grass-fed beef from Whole Foods and cooked medium-rare.  The mushrooms were quickly cooked before my burger in EVOO and a dash of white wine.  Tip: Don’t salt your mushrooms until they are done cooking or it draws the water out & they won’t brown.

Layer in a bowl, starting with the sweet potatoes, then mushrooms, then burger & toppings.  I chose simple ketchup & field greens for this bowl, but the sky is the limits!

A big thank you to Aida Mollenkamp (see my interview with her here) for this recipe ...

Sex and the Celiac: Dating Tips for the Gluten-Free

When you have celiac disease or another gluten-related disorder, dating can be fairly tricky. With ...