Instead of just making more chocolate chip cookies, yesterday I decided to see if I could bake the dough as one big rectangle and make bar cookies out of it. I left out the chocolate chips because I knew I wanted the topping to be chocolate. It worked out okay. I spread the dough as evenly as possible over the bottom of my 11″ x 15″ jelly roll pan that I lined with parchment paper. This was not easy or pleasant because the dough is super sticky, and it didn’t get spread all that evenly, either. Then I baked it for quite a bit longer than the 7-10 minutes cookies need. I wanted a nicely browned, crispy crust. I forgot to pay attention to how long it took, though. I let it cool completely before doing anything else to it.

I made ganache with the chocolate chips and some coconut cream. You get this by chilling a can of coconut milk in the refrigerator overnight. The cream rises to the top, so you can just scoop it out. Underneath is coconut water–save that and use it in something else. I did this after I mixed the dough while it was chilling in the refrigerator. I was hoping it would be plenty cool to whip into a nice topping once the cookie base was cooled. Sadly, that didn’t happen, but I got the idea to spread a thin layer of the ganache on the cookie, then top that with whipped ganache once it was cooled and set.

It was at this point I realized that I hadn’t taken any pictures. So I apologize for not having more. The ganache whipped up nicely. I quit beating it just before I thought it was thick enough, and it was a great consistency for spreading. I got impatient, though and added it too soon. The chocolate layer underneath wasn’t yet completely set in the center. 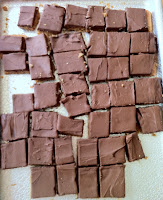 I chilled the whole thing before cutting it into squares using a pizza cutter. I know they’re uneven and not very delicate. Cutting the cookies made the crust crumble quite a bit in places, so if I try something like this again, I think I’ll bake the dough in the cavities of a mini muffin pan and make tartlets. Only, the crust isn’t as crisp the next day, so I’m not sure how well they’d hold a shape. I just ate one of these bar cookies from yesterday, and the cookie base is definitely softer. It still tastes delicious, but I preferred a more crunchy crust.

One thing that I have really enjoyed this past summer is making breakfast parfaits.I do ...

There has never been a more important time to quickly become as healthy as you ...

I have shared my rice bowls many times in the past, and they are some ...