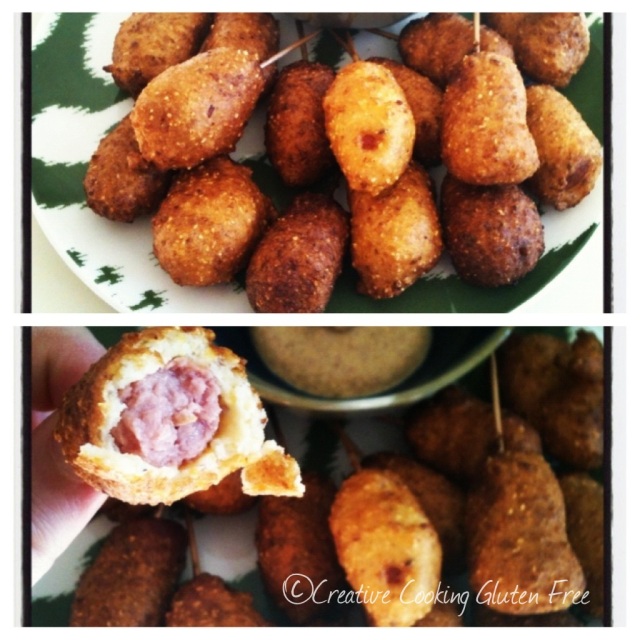 Bryan loves corn dogs and for many years I would even take a bite of one of them.  It was a texture thing to me…I always thought that the corn bread batter would be soggy and mushy and I wanted nothing to do with them.  When Bryan came to visit me in California we picked up a box for him (they weren’t gluten-free), but when he left I still had half a box…they ended up in the trash. I told him at some point I will give them a try.

A few months ago I as fortunate enough to sample some of the Applegate Farms new corn dogs – they were delicious!! To my surprise the coating was crunch and not soggy at all. Ever since Bryan has been asking for me to make some…he would really love them to be full of gluten but he’s a good sport and eats what I make.  Maybe I’ll surprise him and make some regular ones for him anyway.

Yesterday I decided to make some mini corn dogs just to see how they would come out.  I found a recipe in a magazine that seemed pretty simple but it had NO corn in it at all.  How can you call it a corn dog with no corn?? To me it must have corn in it and Bryan loves them with a little bit of crunch to them so I came up with the following recipe.  Please note that this recipe will continue to be worked on…they came out pretty good (to my standards) but Bryan wants more corn flavor to them so I will be posting an updated recipe at some point.

These would be great for: a quick snack for your kiddos, or an app during super bowl!

Again, this recipe will be a work in progress so check back for an update in the near future.

It’s that time of year again and Christmas is around the corner! Try these Christmas ...

Here is a great list of eight gluten-free items for your friends, family or yourself! ...