Guess what I was doing the other day?  Browsing Twitter!  Imagine that?   I was instantly drawn to these Easy Cinnamon Muffins that Jo-Lynne shared.  I knew that Jon would love them, so I pre-heated my oven and got down to work. 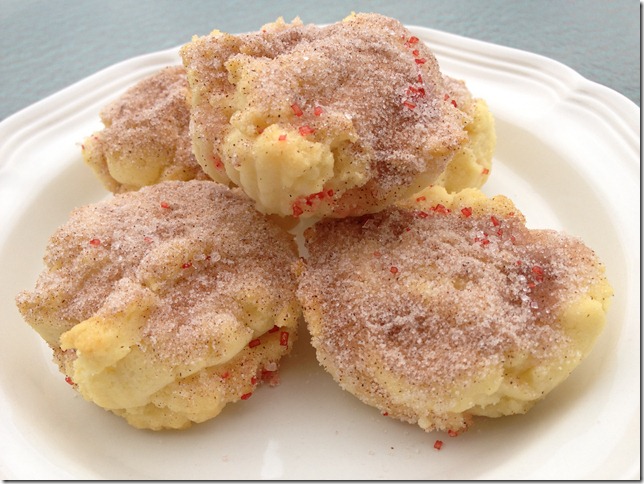 Jo-Lynne’s recipe is not gluten-free, so I converted it to be gluten-free using Gluten-Free Bisquick.  Since the GF Bisquick already has leavening & salt in it, I omitted the baking powder & salt in her recipe.  Hindsight says that this may have not been the wisest choice, but the end result was fantastic, so I am not too worried about it.  Adding the baking powder may have made these a little more muffin-like, as they resemble biscuits, hence the name.

Topping (this made a lot, so consider cutting in half or saving the mixture for future use)

2.  Beat egg in mixing bowl and then add milk & blend.

4.  Add in oil last and stir well to combine.  Batter will be thick; consistency is between cookie dough & muffin batter.

6.  Bake for 15-18 minutes or until toothpick inserted comes out clean.
To say that these were a success is an understatement; Jon inhaled them and wants another batch –STAT!  I asked him if they were more like coffee cake or a biscuit and he said biscuit, which is what I thought as well.  These are a great afternoon snack with a cup of coffee, tea or hot chocolate!

Try these five great gluten-free recipes to make your Christmas merry and bright! Cookies are ...

Vitamin D is an essential vitamin that has many functions within the body. One of ...