Earlier this summer California Pizza Kitchen debuted gluten-free pizza on their menu. I was giddy. I loved CPK pre-gluten-free and couldn’t wait to go back and try their new pizza. Well,we did,and it was great,but our spirits were quickly dampened by the news that there could be major cross contamination issues going on in the kitchen.

I decided to go back and investigate to see what was going on and whether what I had heard about their procedures was indeed true. I was saddened by what I found out. While it had appeared that CPK went to great lengths to add the gluten-free pizza to their menu,they didn’t consider some of the most important issues. Cross contamination is real and can be very serious. Sure,some of those with Celiac Disease don’t react right away (or even at all),but some do and it isn’t pretty. This doesn’t even take into consideration those that have a true allergy (to wheat or gluten) that results in anaphylactic shock.

Emails and tweets were sent to CPK to try to get them to understand the seriousness of this situation. If gluten-free pizza is going to be on the menu and more importantly,marketed to those on the gluten-free diet,the procedures needed to be changed or the pizza needed to be removed from the menu.

Shortly after I tweeted CPK,I received this response: 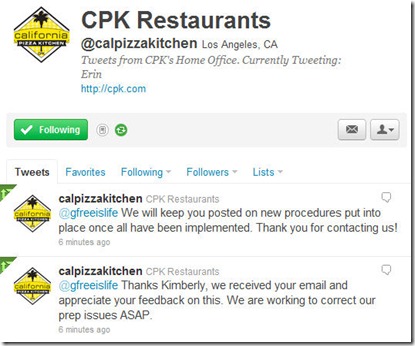 While I haven’t heard anything from CPK since this tweet,despite my having tweeted them twice in the past week,I did hear some news today. Gluten Free Philly reported on Facebook the following news:

California Pizza Kitchen has pulled the gluten-free crust option from its menu at all locations. CPK says that it is reviewing the pizza prep methods with an eye toward bringing it back in the future.

Kudos to CPK for taking the initiative to pull this menu item until they can work out the issues. While I hope that they can bring the pizza back,I do understand that procedure changes need to be made across the company for this to happen. Maybe they will take a look at some of the other companies out there who are making it work – Zpizza, Boston’s Gourmet Pizza, Naked Pizza, Mellow Mushroom and Uno Chicago Grill.

What is “Healthy” Food to You?

In the past few weeks, I’ve had the chance to ponder the question “What is ...

I met Gina through the Celiac Sprue Association, Denver Chapter 17.  She helped me get involved ...

I love to enjoy this almond milk with cereal, in smoothies, and in hot rooibos ...